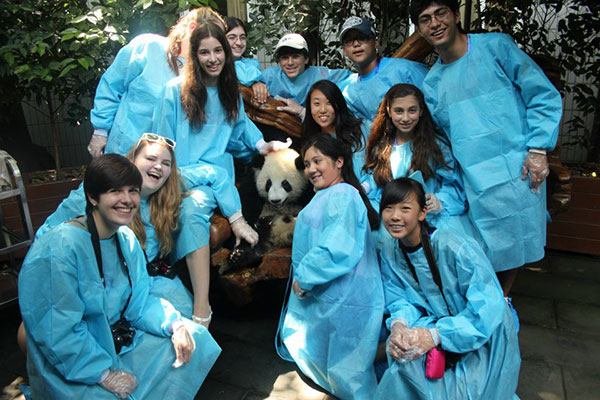 We woke up to an even more spectacular breakfast with all kinds of Chinese and European foods. At 8:30 AM we went to the Panda Preserve, about 30 minutes outside of Chengdu. We spent the morning walking through the Preserve and watching these sweet little bears go about their two normal activities, eating bamboo and sleeping.

Twelve members were able to dole out enough money ($340 USD) to hug a panda. I was able to accompany them as a chaperone and took several pictures, many of which are posted above. We even took a group shot.

Lunch was on the Preserve grounds, a delicious meal of spicy Szechuan food. Some quiet time was spent back at the hotel after lunch then to the Conservatory of Music for a concert. We shared the stage with some wonderful Chinese musicians, including some adorable toddler singers! Our groups were spectacular! After a very sweet gift exchange we returned to the hotel, preparing for an early wake up call and then to the airport for a transfer to Xian.