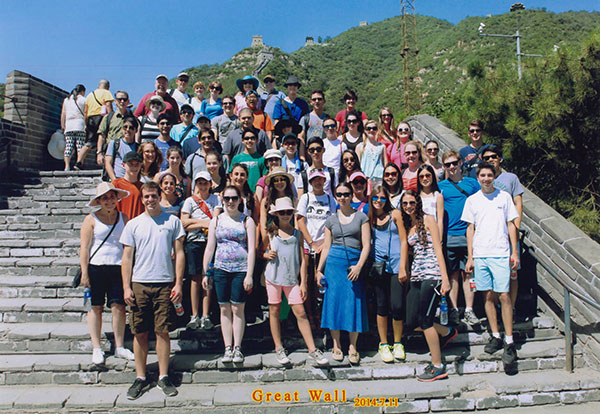 After an early start we boarded buses and braved bumper to bumper traffic until we were out of the downtown area toward The Great Wall of China. Over 4000 miles long it was built to keep the Mongolians away over 2600 years ago. Weather was hot, with a few clouds but otherwise a very blue sky and a warm breeze.

After a group picture most everyone climbed the very steep stairs of the Wall, up to a very high tower and back. Lots of pictures were taken, I am sure you will see many amazing shots both here and on Facebook over the coming days.

We had a lunch stop (8-course family stye) at a government run jade factory and showroom and then back into traffic (24-hour rush hour here!) to go to a rehearsal at the Beijing Conservatory of Music. The concert hall, on the 3rd floor of the building, provided another opportunity for us to show our stair-climbing abilities.

Dinner was provided to us in the cafeteria after which we changed and presented a joint concert with students from Middle/High School #60, a band and choir of national prominence. The concert was held up for a while so that the audience (stuck in traffic) could arrive. We had quite a full house once we got going. All the performers were amazing!

After the concert we had gift exchange with the Chinese musicians and eventually boarded the buses and dove back into the eternal rush hour that is Beijing.